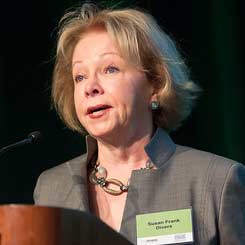 Susan Divers is AECOM’s Assistant General for Global Ethics & Compliance. Her responsibilities include anti-corruption law and regulation, sanctions and anti-boycott compliance, training and hotline supervision. Ms. Divers supervises a staff of 6 professionals. AECOM is a global provider of professional technical and management support services to a broad range of markets, including transportation, facilities, environmental, energy, water and government.  With approximately 45,000 employees around the world, AECOM provides a blend of global reach, local knowledge, innovation and technical excellence in delivering solutions that create, enhance and sustain the world’s built, natural, and social environments. A Fortune 500 company, AECOM serves clients in approximately 125 countries and has revenue of $8 billion in the past year. AECOM was recognized as one of the World’s Most Ethical Companies in 2011, 2012 and 2013.

Ms. Divers’s background includes more than thirty years’ experience practicing law in these areas. Before joining AECOM, she worked at SAIC and Lockheed Martin in the international compliance area. Prior to that, she was a partner with the DC office of Sonnenschein, Nath & Rosenthal. Ms. Divers also spent four years in London and qualified as a Solicitor to the High Court of England and Wales, practicing in the international arena with the law firms of Theodore Goddard & Co. and Herbert Smith & Co. She also served as an attorney in the Office of the Legal Advisor at the Department of State and was a member of the U.S. delegation to the UN working on the first anti-corruption multilateral treaty initiative.

Ms. Divers is a member of the DC Bar and a graduate of Trinity College, Washington D.C. and of the National Law Center of George Washington University. . In 2011, 2012 and 2013 Ethisphere Magazine listed her as one the “Attorneys Who Matter” in the ethics & compliance area. Ms. Divers received the AECOM CEO’s award for excellence in 2011 and was featured in the January 2012 issue of Ethikos. AECOM’s Ethics & Compliance program has garnered five external awards under Ms. Divers direction. She resides in Northern Virginia.