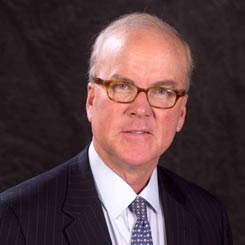 Charlie was in the retail brokerage and wealth management business for 33 years. He started as a financial advisor in Chicago, and through a series of promotions, eventually became President and CEO of Smith Barney in late 2004. When the merger of Smith Barney and Morgan Stanley’s wealth management business was announced in January of 2009, Charlie was named President and COO of Morgan Stanley Smith Barney. His leadership was instrumental in laying the groundwork for what is now, by most measures, the largest wealth management firm in the world. In his role at Smith Barney, he was also a member of Citigroup’s Management Committee. At Morgan Stanley, he was a member of both their Management Committee as well as their Operating Committee. He is a past board member of the SIA (Securities Industry Association, now known as SIFMA) and has been a regular speaker and participant at many industry functions including those sponsored by Barron’s and SIFMA..

He retired from the wealth management business in January of 2012 and since then, has been involved in a number of entrepreneurial pursuits. In addition, he is on the Board of Directors of Bank Leumi US (US subsidiary of the largest bank in Israel) and the Board of Pzena Investment Management (PZN on the NYSE). He is also a partner with RJ Shook in the Philanthropic Research Institute, which is dedicated to showcasing the efforts of some of the worlds leading philanthropists, in an effort to encourage others to become more involved in philanthropy.